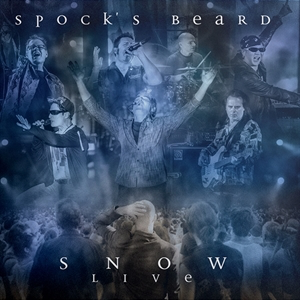 SPOCK’S BEARD FEATURING NEAL MORSE AND ALL MEMBERS PAST AND PRESENT PERFORM ‘SNOW’ FOR THE FIRST TIME EVER AT MORSEFEST 2016!

At last year’s annual Morsefest in Nashville, the dream of every Spock’s Beard fan in attendance came true. The band’s original lineup, and current members, performed the critically acclaimed double-disc concept album, SNOW, in its entirety. It was a moment in time fans never thought they’d ever get a chance to see. SNOW was the last album that Neal Morse recorded with the band before quitting in 2002.
Now it’s time for fans worldwide of Spock’s Beard and Neal Morse to experience that night for themselves.
Spock’s Beard features Neal Morse (lead vocals, piano, synths, electric and acoustic guitar), Alan Morse (electric guitars, vocals), Ted Leonard (electric and acoustic guitar, vocals), Jimmy Keegan (drums, percussion, vocals), Nick D'Virgilio(drums, percussion, vocals, acoustic guitars), Ryo Okumoto (keyboards--hammond organ, mellotron, jupiter 8, minimoog, vocoder), and Dave Meros (bass, vocals).
“It is difficult for me to know what to say about SNOW and Spock's Beard and this whole amazing event that happened in 2016,” says Neal Morse. “I guess what I would like to share from my perspective is that this is an album that meant a lot to many people. It touched the hearts and lives and had profound meaning to people all over the world and in a way, it was like the child that myself and the band bore and then put up for adoption. Since we never played it live and I quit the band right after the album was finished, we never got to experience what it meant to others. We never got to see how it lived out in the world. Until now. I think we always knew that we were going to get together and play it at some point. It just needed to happen. But, as you can imagine, there was a lot of pain associated with this album. So, while Nick (D'Virgilio) had brought it up several times over the years, there was always so much going on in our lives that we put it off and said we were too busy. It just never felt like the right time. Or that's the way it seemed anyway.”
Progreport.com called the Morsefest 2016, “...an event for the ages. For any Spock’s Beard and Neal Morse fan it was a wish come true but it also showed the power of this Prog community which continues to bring people from all corners of the world together to celebrate great music and make friends.   If you were there, it will be a memory for a lifetime, if you weren’t, don’t miss the next one!”
As Neal Morse concludes, “Obviously, the stars aligned and many prayers were answered as we gathered to play the SNOWalbum in its entirety for the first time at Morsefest 2016. Some brilliant person had the idea to enlist the extreme talents of both Jimmy (Keegan) and Ted (Leonard) which brought a dazzle and musicality that is off the chart. Between that and Rich Mouser's astounding mix, not to mention Thad Kesten's team of amazing video people, this is one of the finest live concert packages of which I have ever been involved.”
in four formats: 2 DVD/2CD Digipack, 3 LP Vinyl (Special "Snow White" vinyl), 2 Disc Blu-ray, and Limited Edition Artbook Bundle! (Artbook Bundle contains 2 DVD/2 CD/2 Blu-ray, 50-page color Artbook, poster and postcards. Each is itemized for authenticity.)
Share: