It’s Not Too Late 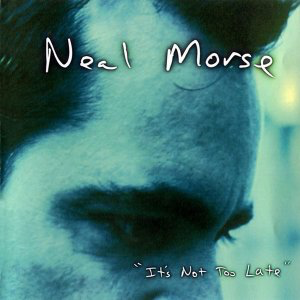 It’s Not Too Late is the second solo outing for Neal Morse and follows in the footsteps of his first CD. This is a more intimate, piano/keyboard led album and covers a wide variety of styles through melodic rock and blues to gentle acoustic tracks and strong ballads. The album comprises of thirteen songs, written over a long period of time – the earliest dating back 1982 and all have the comfortable air of an intimate almost “live” recording. Neal chooses to count in and even comment on a number of the tracks, this laid back approach and obvious passion for the songs makes you feel almost a part of the music. The songs that make up It’s Not Too Late are more concise and song orientated than the music found on Spock’s Beard albums, however, Neal’s distinctive voice and style of delivery will make it accessible to followers of the band and ultimately, given the right airplay It’s Not Too Late could introduce Neal Morse to a much wider audience.