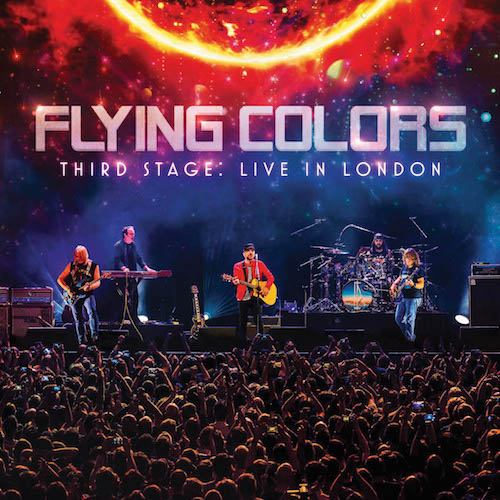 Continuing their pattern of making a studio album, followed by a live album, Third Stage: Live In London is the third live album by the prog-supergroup. It was recorded in December 2019 in London on a short and highly anticipated tour, directly after the release of their studio album Third Degree.

Midway through the set, drummer Portnoy addressed the crowd, saying: “Welcome to the rarest of all sightings, rarer than a UFO sighting, rarer than a sasquatch sighting – a Flying Colors sighting, here on stage in London.

“This is a very sad night for us because it is the last night of the tour and we don’t get to play together enough, so we’re going to savour every moment tonight and enjoy each and every moment here on stage.”

Third Stage: Live In London will be available on a variety of formats, including 3LP orange transparent vinyl, Blu-ray, 2CD/DVD, a 40-page Earbook which spans 2CD/2DVD/Blu-ray, and on digital and streaming platforms.

The Blu-ray and DVDs will feature bonus material, including music videos and concert footage from their Morsefest 2019 appearance at Cross Plains, Tennessee.

RADIANT EXCLUSIVE: ALL pre-orders of any format placed before July 1st will be personally autographed by Neal Morse!

In addition, all pre-orders include a free 11:22 download of "Crawl (Live)," an exclusive unreleased track from Morsefest 2019! After your purchase, the download will be available on screen, as well as placed in your downloads folder.